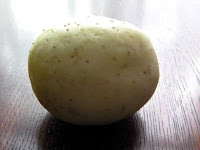 Never heard of it? Neither had I until it turned up at my local market, the Bi-rite. They're almost the size of tennis balls, and plumply shaped as slightly elongated globes. They've got some tiny black dots on the outside, and they taste like a cucumber except perhaps a bit lighter and less vegetal.
The great thing about lemon cukes is that you don't have to peel them! I know it seems like a small thing, but it's still a cool thing. The skin is very soft and fully edible. You get an nice cucumber flavor and snap, but the texture is a bit silkier and juicier than the familiar English variety.
Cucumbers with Sesame
Want something new to do with cucumbers? My dad recently went to France came back with this one for me. I made it with the very lemon cucumber shown here in less than 10 minutes. You can also do it with a regular english cucumber, just be sure to peel.
How to Make Sesame Wheels
Take a few tablespoons of sesame seeds and toast them in a pan until light golden brown. They become scented and slightly darker. Take care not to overdo them, once they get to toasting temperature they go quickly!
After the sesame seeds have cooled to room temperature, mix in a bit of salt and blend thoroughly. Next, slice your cucumber and simply press both sides into the sesame seeds. That's it! And it's fabulous and super easy.
Pile them up on a plate, serve with a nice chilled Sauvignon Blanc and you're set for an afternoon of relaxing, sesame adventure.
Posted by Benjamin at 4:55 PM